Mrs. Nina Joy Hernando Tañada, BSSW ’79, was the first to be given such honor on April 17, 2013 during the 17th Annual National Forum and General Assembly of Local Social Welfare and Development Officers held at the Oriental Hotel, Legazpi City, Albay. A municipal social welfare and development officer of Oton, Iloilo, Tanada won the prestigious award in 2010, 2012 and 2013. She was cited for consistent and efficient delivery of distinct and innovative social welfare and development programs, projects and activities which contributed to positive impact, quality and sustainable results to the lives of her fellow constituents. 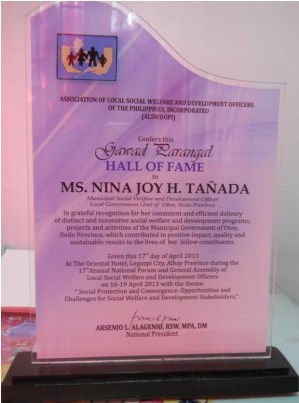 The Search for Gawad Parangal is the highlight of the three- day gathering of the ALSWDOPI. The award is given to recognize the invaluable support to social welfare and development efforts at the Local Government Units (LGUs), as well as effective and efficient program implementation. There are three major categories of the award, as follow: Outstanding Local Chief Executive (Governor, City Mayor, Municipal Mayor), Outstanding Local Social Welfare and Development Officers (Provincial, City and Municipal Social Welfare and Development Officer), and Outstanding Chapter in the entire Philippines.

The recent award is another feather in the cap of Mrs. Tañada. It will be recalled that in 2010, she was awarded as one of the Ten Outstanding Social Workers in the Philippines (TOSWP) by the Philippine Association of Social Workers, Inc. (PASWI). She shared such distinction with two other alumni of the Department of Social Work, Central Philippine University. These are Mr. Victor Salmon (BSSW ’73) and Rev. Edwin Lariza (BSSW’89) in 1998 and 2004, respectively.

Other Centralians who have distinguished themselves in the social work profession are as follows: Mr. Lazaro Petinglay (BSSW ’89) was adjudged as 2001 Most Outstanding DSWD Rehabilitation Workers in the Philippines by the Department of Justice. In 2005, he was also awarded as Outstanding Provincial Social Welfare and Development Officer by the ALSWDOPI. The same award was received by Dr. Neneth Pador (BSSW ’76) in 2008. Another Centralian, Mrs. Adela Talamor, was awarded in the same year as Outstanding Municipal Social Welfare and Development Officer.

However, the various distinctions of Centralian Social Workers are just continuation of the legacy set by social work pioneers in Central Philippine University. Prof. Irene Ortigas, the pioneer of the Department of Social Work, was national awardee in 1999. Having garnered the Regional Award for Individual Category in Western Visayas, she was finalist for the Bayaning Pilipino- National Level. Her successor head of the Department, Prof. Ruth C. Corvera was also adjudged Top 5 Finalists in the Ramon Aboitiz Award for Exemplary Individual during the 2nd RAFI Triennial Awards for the Visayas and Mindanao in 2002.

This blog is an attempt to update alumni, friends, partners and supporters of the Department of Social Work, Central Philippine University, Iloilo City on the activities of the Department, as well as that of its alumni.  We welcome feed backs, comments, suggestions and even news articles and feature stories of the activities and achievements of alumni. Send your contribution to cpusocialwork@gmail.com. You can also visit our facebook page.