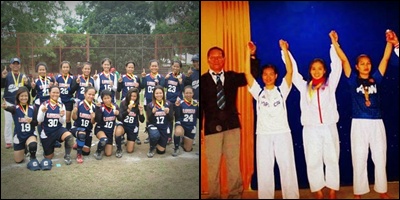 On the 2014th Regional PRISAA meet held in Antique last January 8-12, The CPU Softball Team (Women) and Karatedo Team (Women) grabbed the championship. Proudly, two of these ladies were from the Department of Social Work.

Ms. Rhea Sevilla, third year Social Work student, has been a varsity player of the school in softball. She said they have dominated the championship against St. Anthony’s College with the score of 29-0. Coached by Ptr. Kim de la Cruz, they brought home 15 gold medals all in all.

Ms. Remelyn Fuentes also a third year student, brought 2 gold medals in Karatedo Women. Their team was composed of 5 members of which 4 of them were girls, coached by Marlon Martinez. Fuentes joined the Individual Kata and won 1 gold medal. Another gold medal from Synchronized Kata composed of three players.

Congratulations! We will continue supporting you until your next game in the Nationals on April.